I WROTE SOMETHING ELSE BUT IT FELT TOO "VENT-Y"..NOT THE COFFEE SIZE FROM STARBUCKS..WHICH BY THE WAY THE ONLY FRAPP I LIKE SO FAR IS STRAWBERRIES N’ CRÈME…I TRIED SOME OF MY OTHERWISE FAVS AND NO THANKS.

My Chai Tea Latte should be hot and my Green Tea on ice.

Random, why is that ONE bag of M&Ms is not enough? No really, it isn’t! Trust me… it isn’t!

I haven’t done one of these in a while..so why not!? Plus, I had a minute or two to spare.

And, because I too am a follower: http://www.othersuchhappenings.com/

What color are your socks right now? Truthfully since I left TCH in 2007, I have not worn socks! I wore then for 7 years along with my 6 pairs of tennis shoes and then like Forrest Gump, I just got tired and stopped.


What are you listening to right now? My co-worker speak Vietnamese, my other co-worker vent about the fax machine and my windows media player…just changed it to John Mayer…waiting on the world to change…


What was the last thing you ate? My SECOND bag of Peanut M&Ms


Can you drive a stick? Nope. My Dad tried to teach me, fail…then the hubby….super duper fail.

Last person you spoke to on the phone? My mom…much needed comfort and reminders.


What is your favorite sport to watch on TV? Anything the hubby is watching…even though it frustrates him tremendously that every other question is…and why would they do something like that? NO REALLY…I don’t get half the sports on TV but love watching him get frustrated at me and then ask if I have something else to do..cause I DO…wink wink. lol.


What is your favorite drink? GREEN TEA.


Have you ever dyed your hair? Every color under the sun and then some…it’s been dark brown (my natural color) since the day I found out I was pregnant (Jan. 27, 2009). I thought that being in the presence of any type of chemical would harm my baby…so didn’t even consider or miss it!


Favorite food? Homemade Mexican food made by my mom! No really best Pozole and Picaditas in the world! 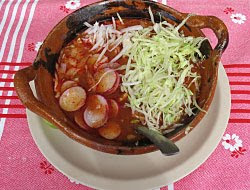 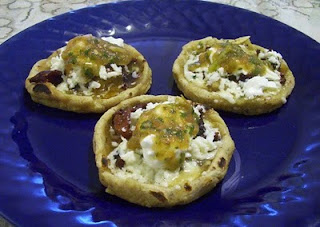 PICADITAS
What is the last movie you watched? Movie? Uhm. I don’t remember…so that should tell you how long it’s been… or maybe the age of my son… almost 10 months!


How do you vent anger? After I pray and ask God to help GUIDE me through it…usually verbally…mild tone, to a friend…mostly my husband, my sister, my mom and maybe one or two girlfriends….if and when they are available and not to all of them just to the ONE who is available at the moment…if not….let it go…God is here.


Favorite Season? Winter? HA. I know we live in Houston and seasons are hard to come by but yes…cold, wintry days are great! More so if you can stay in your warm bed and drink a warm chai tea latte..and if you live where there is snow, it's even better..


Cherries or Blueberries? Strawberries? Although my Father-in-Law has the best Cherries from his family’s ranch… mmmmm.


Living situation? Temporary "Single" Mom with an almost 10 month old…when the hubby comes home in August…we are a "single family home" of 3 according to the Census.


When was the last time you cried? Last week, Thursday…I was getting a cold, had a horrible headache…and had to go pick up Santi..I felt horrible! All I could think was I can’t be sick…what will happen if I am and Santiago and I are here alone…I prayed, took some meds, slept it off (30 minute nap) and went to get my son.


What is on the floor of your closet right now? A folded blanket, some shoes and broken glass…Santiago broke the mirror..and I haven’t been home to clean it up!


What are you most afraid of? Illness. In me or my son. While we are alone.


Favorite day of the week? Sunday.


How many states have you lived in? 3. Tamaulipas(in Mexico after I was born…my parents thought they wanted to go back home), Texas and Michigan


Diamonds or pearls? Diamonds, although I only own one... my engagement ring... and it's not too big...but perfect for me.


What is your favorite flower? Hydrangea, they remind me of my wedding.

Did you get an H1N1 vaccine? Yes, because I was breastfeeding my Santi and he was too young to get it.

so glad you played along!

pozole and picaditas? i have never had that but man, that looks delicious! since you are in houston (and so am i) what is your fav mexican place to eat out? i refuse to learn how to cook mexican food because i want there to be one place to go out to eat when i don't want to cook! i make a pretty mean alfredo so italian is a no-go on eating out. ditto steaks.

i know what you mean about being scared of the sickies. when my kids were little, david would be working all the time and we'd see him 2-3 days a week. it was hard with noah (my middle son) bc he was such a sick baby. constant breathing treatments, rsv, bronchitis, ashthma. but praise the Lord that he was a happy baby! that made things a little easier.

hope you have a very happy independence day!!! i'm surprised it's not raining outside right now. just super hot and steamy. bleh.

I guess since I am Mexican and my family always cooks...the best...in Houston...can't say... :/ TEX-MEX...Now there I can tell you uhm... places like Chuy's and Papasitos....but other than that...the "best" Mexican places that SOMEWHAT come close to Mexico are SOME, only some, of those taco carts out on the side of the street..the best ones are in the rough parts of Houston and well we only go when it's several people..HA. But other than that...none really....I am yet to find a GOOD and REAL Mexican spot..bitter much? LOL. No but really..It’s hard... once you've had homemade Mexican food or been to Mexico..nothing tops it! :D

As for illnesses, they scare me...and I guess that God knows how much I would have panicked and how much of a baby I would have been if my hubby was here..so he has allowed me to deal with them on my own... and now...I feel like a laid back expert...well not really but you know what I mean! lol.

I actually left for the weekend...my husband met us in Lake Charles for the weekend! :D So, I came back to a hot and steamy Tuesday Work Morning! SUPER BLEH! :D LOL.