I am really excited about this post.
It comes from an old friend from one of my very first jobs...
I worked with Jess at Texas Children's Hospital here in Houston.
I never thought I would keep long lasting friendships with such amazing women
but God has been great to me!

Jessica is one of those Momma's that continuously inspires me to be not just a momma..
but a MOMMA!

Might I add, she has the most handsome little boys ever!!

I’m Jessica Meza, a.k.a Momma.  I have two boys.  My oldest son, Gabriel, just became a teenager over the summer.  And my youngest son, Julian, is 7 years old.  I have always been a “working” mother.  I’m not gonna lie, part of me enjoys working outside the home since I’m not the best at keeping house…so I try not to complain too often.  Currently I’m working as a Realtor, and part time as an office assistant at a psychiatrist’s office, and trying to create a new bakery- JJ’s Cupcakery, with my BFF.  Yup, I’m busy!  Amazingly, I still have time to enjoy my crafts: photography, scrapbooking, crocheting, sewing, and reading.
The year I turned 23, two wonderful things happened.  First, I became pregnant for the first time.  Second, I gave birth to a sweet and beautiful baby boy.  This first pregnancy was completely unplanned, but I prepared myself through one of my favorite activities, reading.  The pregnancy itself took some getting used to.  My body was being difficult, and didn’t want to keep any food down for several months.  During this time period, I actually lost weight.  Once I was able to eat and keep my food down, my weight stabilized and luckily I had no other problems.

On July 29th, I woke up about 6 a.m. with what I thought was a stomach ache.  I headed for the bathroom but was unsuccessful.  I returned to bed, only to be awoken by more stomach pain and then I finally realized that I was experiencing contractions.  Later that day I arrived at Memorial Hermann Hospital.  I settled in and received my epidural. Then I waited.  As the afternoon became evening, my contractions became even stronger.  I requested another epidural, but it was too late! The baby was coming and I had to push.  I know the pain was intense since the epidural had mostly worn off.  I struggled with the pain for a while, but finally at 8:13 p.m. Gabriel was born.

It wasn’t difficult to adjust to my new life as a mother.  Gabriel was an excellent baby.  He had a good temperament and even began sleeping through the night at 4 weeks!  I don’t recall many specific details from that first year, but he was the first grandkid on both sides of the family so he was spoiled with love and many, many toys!

My second pregnancy was planned and went along just fine.  I only suffered through a little morning sickness in the beginning.  This time I was working and worked until the day before the baby was born.  I left work on Friday, after having contractions for most of the day.  That night at about 11pm I was admitted to the Methodist Hospital.  This time I was feeling strong contractions before I was given the epidural.  My legs were shaking uncontrollably from the pain.  It wasn’t long after I received the epidural that I was in full labor.  This time the medicine was working great and the labor was easy for me.  I felt fully alert and was able to push without any pain.  Julian was born on February 7th at 7 a.m. and weighed 7 pounds.

Julian is my “little one”, and I love him, but I don’t recall having all these white hairs before he was born!  It was TWO years before I was able to get a full night’s sleep…I was just exhausted.  And the tantrums!  I had never even thought that I would have a child that would throw such horrifically loud, screaming fits, throwing himself on the floor, crying, throwing up, will this EVER end tantrums.  I’m actually smiling as I remember them, as if I find them funny, but I have the white hairs to prove they were real and not figments of my imagination.  Well at least he grew out of it (mostly).

I love so many things about my boys.  I love how they are the same and how they are different.  I love watching them have fun, hearing them laugh, and snuggling with them.  I love being their mom. 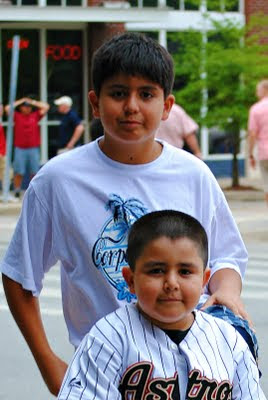