29 years ago my parents vowed not to gauche each other’s eyes out and to always be there for one another. 29 years later…they’ve semi-accomplished that, but truth is Marriage is difficult. It’s about two people who “think” they know each other, coming together to form a life together! And, oh boy, is MTV so right, YOU THINK YOU KNOW….BUT YOU HAVE NO IDEA!

In Genesis 2:24, it states.. 24 “For this reason a man will leave his father and mother and be united to his wife, and they will become one flesh.” Simple as it may sound it’s probably the most difficult concept I have had to bare.


My parents have been through it ALL. They have risen for the depths of despair to victory. Be it as it may, their marriage has withstood it all. And, as I look at my siblings and seek that same determination I am more than satisfied that dysfunctional or not, my family has proven above all, commitment. Commitment to overcome and breakthrough “el que diran”, in the end, it’s about Love, whether it’s of others, of your children, or even of yourself, commitment shines.


I don’t have a fairy tale story about my parents, and at times the memories are not that great but my parents as individuals suffered a lot. My mom grew up poor, mostly raised her 5 siblings, one with Cerebral Palsy and probably put up with more as a child than she has or would have ever needed to. My mom is a strong and determined person because she grew up without a father and with an irresponsible mother. That’s life; we all have a cross to bear. My father grew up too fast and eventually gave in to drinking and smoking at a young age, he worked so that his younger siblings could have an education and more than likely because he wanted to and didn’t know what to do with his life. A lost soul he found my mother, against all odds and my mother’s uncle, who raised her, they got married. My dad was the “bad boy” and my mom the “damsel in distress”.

They met in 1981 in Reynosa, Tamaulipas and married the same year, I was also born the same year, you do the math. Ultimately they came to the U.S., had 4 children and have now seen them evolve, succeed and form their own families, that’s LIFE. You live and you learn. I am by no means trying to call out my family or be rude and disrespectful but I am real. I know what it takes to survive in the real world and I know how hard life can be. I have no secrets, well we all do but I have none that would cause shame and I have no regrets, my family has been through VERY difficult times, those of you who know me….know of those times well. And yet, here I am writing about my parents and their “love”. Why? Number one they have been married for 29 years and at this point despite the countless threats of a divorce, I know they will be married the rest of their lives, bickering and shushing each other. BUT THAT’S NOT HOW MARRIAGE IS SUPPOSE TO BE….BUT…THAT’S LIFE….and at times…THAT’S THE ONLY WAY A MARRIAGE CAN “BE”. Sad? Nah. My parents don’t mind it at all and not all married couples have the perfect cookie cutter marriage… heck some are still trying to figure out why they got married as Tyler Perry would insist.


Gosh Connie this is your worse ever….


The thing is all that I have learned about marriage and commitment is picked up from others telling me…don’t make the same mistake I made, for you I want this… and I have listened. My mom taught me to fight, to withstand and to respect but she also taught me to Love, to commit and to be loyal. My dad a bit more, rough around the edges taught me to just do it! Ha. Take chances and apologize later… Their mistakes, their differences, their lives have made me who I am and I love them for that. Without the difficulties that they have lived I don’t think I would have succeeded or thrived as much as I have as a PERSON. Don’t get me wrong, AGAIN, I am in no way judging or being disrespectful, I think we all have these people in our lives. It’s how we use their good and bad examples in our lives that give that respect and honor to who they are! In the end, it’s love it or leave it and THAT is life. No one has forced my parents to be together they have chosen to be together and for that I love them and respect them. No person is perfect and no marriage is perfect, it’s living and loving those imperfections on a day to day basis that somehow makes the world spin!

To them I say:

Feliz Aniversario!
Next year, 30 years…and that’s for me too!
Familia Leon(Grawr!)
( Family Picture from my UH graduation in 2005) 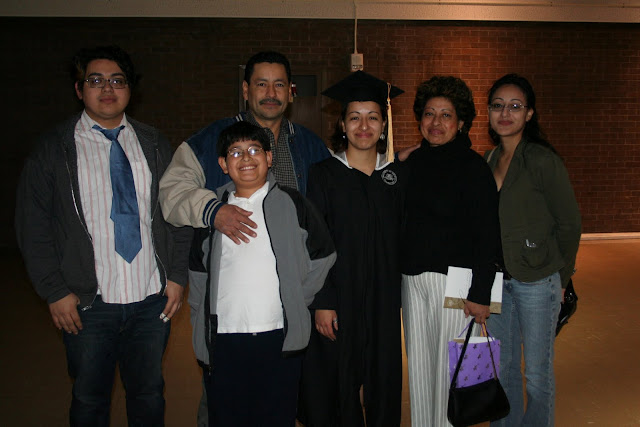 Email ThisBlogThis!Share to TwitterShare to FacebookShare to Pinterest
Labels: Family

My parents were celebrated their 35th aniversary this year.

Aww Connie, this was beautiful! I really enjoyed reading this! Thank you for sharing! HAPPY ANNIVERSARY TO YOUR PARENTS!!! MAY GOD BLESS THEM WITH MANY MANY MORE! Love ya!