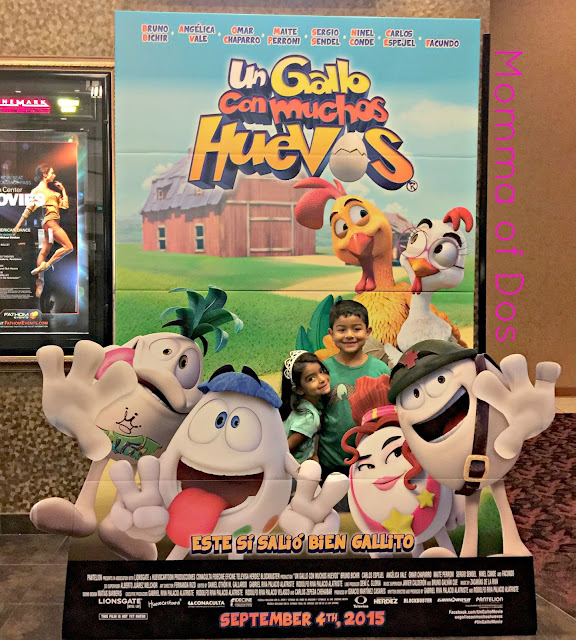 It was an on and off rainy day in Houston last Saturday during our Labor Day weekend. We were feeling a little lazy so we planned a late, LATE showing of a new movie. We had seen the previews for it and then my Husband made it into areal life plan for us to go watch it. He showed the kids preview after preview so they would get excited. Well that didn't take long and after 8 hours of "Mom is it Movie time yet?", we finally made it. The theater filled quickly and a little unexpected for a 10pm showing of an all Spanish movie on a Saturday night. We secured seats and snacks.

Now a little background on the Spanish language in our home. My Husband and I are completely fluent we can speak, read and write it. My kids started off fluent and my son has now started to fall off wagon.  But, my Cami has started to catch on strong. Santiago, doesn't like to be left behind so has also started to try and speak more Spanish and of course they both understand it. Our families both speak Spanish, all the time. You must at least understand around us. We definitely try to work on it and often get the kids to speak more Spanish around the house. I personally have a bad habit of speaking English at home. One that I need to break if I want my children to keep learning Spanish.

Back to the movie. The humor was on point and very much for adults. But, when isn't it. I heard more adults laugh than kids most the night. It's pretty funny. If you offend easily, it might not be for you. My children understood the overall message of true bravery and overcoming your fears to reach your goals. The jokes, went right over their heads. They did laugh at the funny moments; like when el Gallito, Toto was being trained to become a Gallo de pelea to help save their ranch.

Y los Huevos? Well those Eggs were on a whole other level, if you know the eggs from their YouTube stardom then you know what to expect. But, yes the concept is very funny and the overall message is a strong one. To be courageous no matter how insignificant or weak you might think you are.  Hay que tener huevos para ganar!

Not to make it any less but if you are reading the subtitles to this movie, it won't be the same. The literal translations and absence of translation, will not be as funny. There is nothing like knowing the language, understanding the comedy and enjoying it. I give it BIG Huevos for a great new Spanish comedy movie!

::Information below provided by PR company::

The Biggest Spanish-Language Film of the Year!

On DVD and On Demand December 1

SANTA MONICA, CA (October 14, 2015) – The first-ever wide release of a Spanish-language animated franchise cracks into homes when Un Gallo con Muchos Huevos arrives on Digital HD on November 17 and DVD and On Demand on December 1 from Lionsgate Home Entertainment. Just in time for the holidays, the hilarious Un Gallo con Muchos Huevos features the voice talents of Omar Chaparro (Pulling Strings), Bruno Bichir (Netflix’s “Narcos”), Angélica Vale (TV’s “No Me Hallo”) and Maite Perroni (TV’s “Cuidado con el Angel”) as young rooster Toto and his friends step into the ring to save the farm they love. Based on the hit Mexican animated franchise, Huevos, the egg-citing adventure will also be available for the first time in an all-new English version voiced by an all-star cast titled Huevos: Little Rooster’s Egg-cellent Adventure exclusively on DVD, Digital HD and On Demand.

Toto (voiced by Bruno Bichir) is the kindest rooster in the henhouse, but when the evil landlord of the farm he lives in threatens to destroy his family and home Toto is forced to become a brave rooster. That’s when Toto and his friends (Voiced by Angelica Vale, Maite Perroni, Omar Chaparro, Ninel Conde, Carlos Espejel) join forces in an egg-cellent adventure that teaches us that the big surprises can come in small packages.

The home entertainment release of the knockout family adventure features two behind-the-scenes featurettes. While Un Gallo con Muchos Huevos andHuevos: Little Rooster’s Egg-cellent Adventure  will each be sold separately on Digital HD and On Demand, the DVD version will include both the Spanish and English versions of the film. The Huevos: Little Rooster’s Egg-cellent Adventure DVD will be available for the suggested retail price of $19.98.

ABOUT LIONSGATE
Lionsgate is a premier next generation global content leader with a strong and diversified presence in motion picture production and distribution, television programming and syndication, home entertainment, digital distribution, new channel platforms, video games and international distribution and sales. Lionsgate currently has more than 30 television shows on over 20 different networks spanning its primetime production, distribution and syndication businesses, including such critically-acclaimed hits as the multiple Emmy Award-winning Mad Men and Nurse Jackie, the broadcast network series Nashville, the syndication success The Wendy Williams Show, the critically-acclaimed hit series Orange is the New Black and the breakout series The Royals.

Its feature film business has been fueled by such successes as the blockbuster first three installments of The Hunger Games franchise, the first two installments of theDivergent franchise, The Age of Adaline, CBS/Lionsgate’s The DUFF, John Wick,Now You See Me, Roadside Attractions' Love & Mercy and Mr. Holmes,Lionsgate/Codeblack Films’ Addicted and Pantelion Films' Instructions Not Included, the highest-grossing Spanish-language film ever released in the U.S.

Lionsgate's home entertainment business is an industry leader in box office-to-DVD and box office-to-VOD revenue conversion rates. Lionsgate handles a prestigious and prolific library of approximately 16,000 motion picture and television titles that is an important source of recurring revenue and serves as the foundation for the growth of the Company's core businesses. The Lionsgate and Summit brands remain synonymous with original, daring, quality entertainment in markets around the world. www.lionsgate.com
at September 12, 2015