Without a doubt a child changes everything. And, every time I sit and focus on how beautiful, happy and healthy our child is I can’t help but weep. The tears though are those of giving THANKS. I often look back my life and think about Santiago and wonder what could I have done right to deserve someone so wonderful in my life. Meaning I have not been the best person but my son, he makes me feel not only like the BEST person but like the MOST BLESSED person!

Santiago has proven to bring life, light and pure LOVE into our lives. He is just filled with so much happiness and can brighten any dark spot in my life.

He is discovering his limits not only physically (as he turns over on his belly, sits up unassisted and jumps to the sky in his jumper; THANKS TO JOANI AND CLAUDIA THAT THING IS AWESOME!) but, also his ability to capture EVERYONES attention. I feel like he really does know that, that toothless smile makes us melt over and over again and that his “dancing, concentration and determination” on that jumper makes us marvel at his every move. He is now yelling just to see who will run and crying just to see who will pick him up. He loves seeing smiley happy faces and doesn’t like to be alone an attachment issue inherited from his father and at times me…

The oohhh-ing and ahhh-ing only increased this month and speculations of what he will sound like when he talks or how fast he will makes us run when he starts walking are talked about everyday. Already we know number one we have an active one and number two…the mouth…..the talking…yea another inheritance from his momma and daddy! He is already gruting, uuuhh-ing and ahhhh-ing as if trying to tell us all about his very adventurous day! God only knows what kind of tight spots he puts his grandma and great-grandma in all day!!! He is the sparkle in my eye, the joy in my heart and chipper-ness in my life!

Again, I can’t even remember what my life was like before him, from day one it seemed like I knew him and had him in my life forever.

• He started going to Nana “Daycare” (Grandma's house to be taken care of!) since my husband started school in Jan. and I think he does really well. Ricardo feels like he “knows” his routine and the fact that daddy drops off and mommy picks up. Either way after a LOOOONG day at work rushing to his grandmothers house to just see him and hold him….makes it all better. He smiles every time as if saying “You were gone a long time!?” His smile and the lighting up of the eyes, as if he hasn’t seen you in years, never gets old.

• He is finally sitting unassisted. I want to credit the Bumbo seat with my co-worker Du-Ha was soooo awesome to give me! After a couple of days of practicing in it we sat him on the bed propped him up and watched as he caught his balance and SAT! It was great. He looks like a little Monkey. He smiled and was amazed at his accomplishment. We were nervous but ranting and raving two seconds later about how he sat on his own. In light of this he thinks he’s a man and doesn’t want to lay down for anything!

• Which leads to his 3rd highlight, he wants to STAND, yes STAND in his baby tub and be showered. He no longer likes to lay in it. He can barely sit on his own but he wants me to hold him standing up as I pour water over his head like a shower. He is strong and will not take, NO, for an answer…. So bath time is now limited until I find a solution! He half way sat for about 10 minutes and would lay down until I sat him up or stood him up which is very tiring. But, I guess that’s babies and BOYS for that matter! :D

• So we started feeding him cereals and making fruit and veggie purees so that he could try them. Well initially he hated everything but saw it as a new concept and jumped at the spoon as it left the bowl. As of Valentine’s weekend he is eating FULL bowls of sweet potato, rice cereal and banana’s and apples! He is very active though and I can see him burning all those calories already! Which leads me to a concern, should that concern me, the amount he eats at his age?

• He did have his first antibiotic this month for a rumbling noise in his chest…which with the meds is still not better. So, I will have to ask the doctor again.

• He now loves pictures, after 5 months of me shoving the camera in his face he knows what it is, when to pose and when he has just about had enough of it!

• That he can yell

• That he can sit

• That he can eat from a spoon

• That he has toes

• That he has control over EVERYONE in our house!

• That he has a new baby cousin who cries in a very peculiar way....he stares at Olin as if thinking…you’re such a baby… lol.

• That he can produce all types of reactions by the simplest of accomplishments.

• Keeping up with buying diapers and wipes

• Knowing WHEN to call the Dr.
Baby-

• Getting him to sleep more at night than during the day.

• Getting him to eat and drink.

• Teething still not sure if it’s painful or bothersome….but he still gets some Orajel and/or his teether just in case.


Height: 26 ½ Inches—90th percentile for his age; Same as last month (Until our next Dr’s visit)

Weight: 16.5 lbs—75th percentile for his age; Same as last month (Until our next Dr’s visit)

Next doctor’s visit: at 6 months in March

What to look forward to:

• At this point just about everything!

• We do have a Photo Shoot soon after Santiago turns 6 months so I can’t wait to compare photos from when he was 6 weeks to now at 6 months.

• Crawfish season and his “Crawfish” outfit. 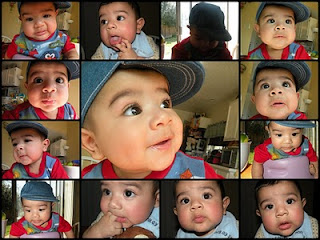