Last week the kids and I patiently waited a couple of days while we received our very first package with contents to be reviewed..literally. Ha.

The package arrived before Thanksgiving but with all the hustle and bustle I was unable to open it. But, as we ate breakfast and played with the kids Sunday morning, I decided that we would open the box and see the kids reaction.

So, we opened the box.

This is what came from it: 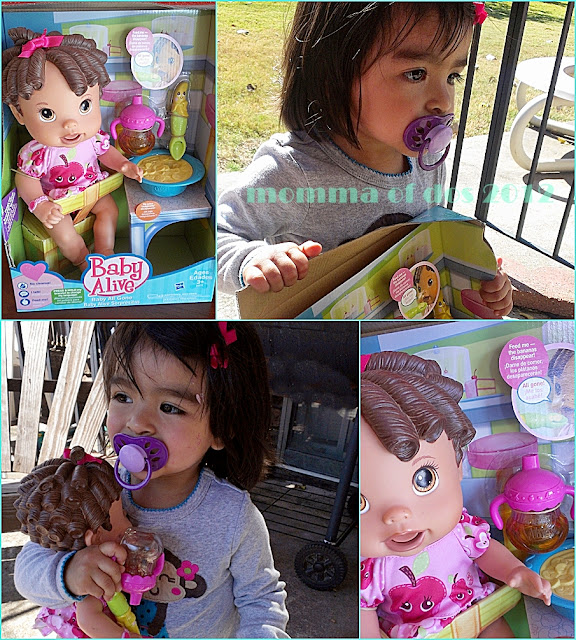 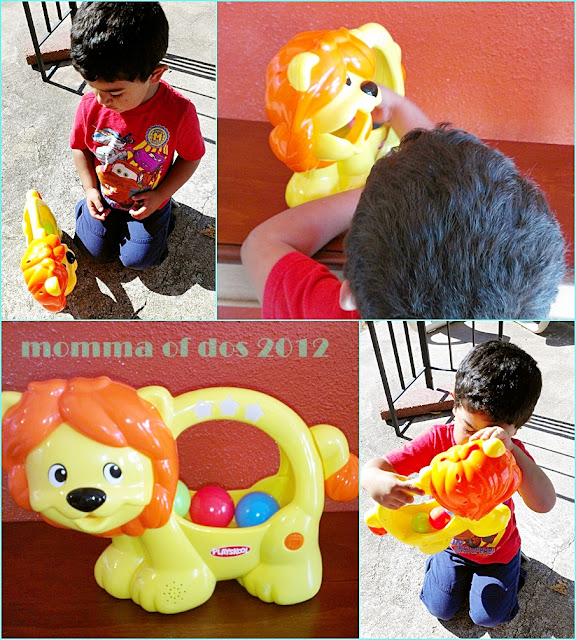 We received the Baby Alive Baby All Gone doll and the Poppin'Park Learn n'Pop Lion from Hasbro.

{BABY ALIVE BABY ALL GONE Doll
(HASBRO/Ages 3 & up/Approx. Retail Price $24.99/Available: Fall 12)
It’s snack time for your BABY ALIVE BABY ALL GONE doll and she’s hungry for strawberry yogurt! Put the yogurt in the spoon and “feed” it to your adorable little baby to watch her “eat” it all up. If baby is still hungry after her snack, she’ll call for her mommy to feed her more with sayings like “Strawberries are yummy!” and “Where did it go?” When it is time for a drink, the BABY ALIVE BABY ALL GONE doll can be fed from her bottle, and her milk will magically      disappear. Since there’s no mess to clean up, you can cuddle and play with your little one right away! Requires 2 “AAA” batteries, included.  Available at most major toy retailers nationwide and on HasbroToyShop.com.}

{LEARN ‘n pop lion
(PLAYSKOOL/Ages 9 months & up/Approx. Retail Price: $19.99/Available: Fall ‘12)
This adorable lion is a playful grow-with-me toy that helps little ones develop fine motor skills and learn to count to ten in four different languages – English, Spanish, French and Mandarin Chinese. Babies can drop balls into the lion’s belly from the side and push down on the tail to activate music and lights as the colorful balls bounce out of the lion’s belly to encourage chasing. As babies grow, they can feed the balls into the lion’s mouth and hear him count up to ten in four different languages.  Toddler is rewarded with lights and sounds as she counts along! Includes three POPPIN’ PARK balls and an easy-carry handle for on the go fun! Requires two AA batteries, included. Available at most major toy retailers nationwide and on HasbroToyShop.com.}

Both Baby All Gone and Learn N'Pop Lion are Bilingual and the kids had so much fun listening to {& learning} everything they said in BOTH Spanish and English. My son was so thrilled for the rest of the afternoon he went around saying... "ENGLISH:ESPAÑOL! HOLA!" when he would switch between the two languages. The Lion counts in Spanish, English and French! Santi is learning his numbers so this is helping to reinforce what he has already learned! Plus he is also learning the numbers in Spanish so again the Lion is a big help in that area!

It's pretty interesting to watch him speak both languages. He has been a late bloomer as far as language goes; plus having to learn two languages has made this milestone a little difficult to reach. His vocabulary is very ample now and with toys that allow for bilingual learning like the ones provided to us from Hasbro, I think he will love learning in both ENGLISH and ESPAÑOL! Ha.

Cami on the other had was quickly transformed. There is something about little girls and baby dolls that just instantly turns them into the most caring little Momma's. Cami spent the rest of the afternoon reading, feeding and changing "her baby". She loves her Baby All Gone doll! And, she too spent the afternoon saying..."pa-tanos", "rico-sh"! Ha. It's been fun!

Before I had children I never even thought about this type of toy but now that I do, I am in love. Do you know of any good toys that will help your children both learn a second language and develop a good sense of imagination? If so share! I would love to know!

Momma Disclosure: This is not a compensated post. However complimentary Hasbro products were provided through a representative for the purpose of producing this review. The above statements are both my true and honest opinion.
at November 28, 2012

I totally remember this doll at Latism. It's brilliant that the doll is bilungual. Really enjoyed your review and the pictures of your mini-me! <3

oh, we have that doll. Doll Face loves it. And I love the fact that we can switch the language that she speaks. :) It is such a great toy and best of all it is built so well.

We try to buy toys that will help her with her language development and bilingualism. I feel that the more we expose her, the better she will be in the future.

Thanks for sharing. :) That little lion looks so cute. I think I will have to snag one up for my nephew.

Awesome! I love Hasbro and was so excited to see them at LATISM12.
I love that the Baby Alive doll has the option of spanish too! great review amiga!

Love this post, Connie!! And I DO think its super helpful for mommies! I know with both the kiddos, we research toys before buying them! Aislynn learned her Spanish counting with toys like these at the age of 3! They're super helpful! Also, here is one that is fun for the kiddos! They have different varieties, too! http://www.amazon.com/LeapFrog-Fridge-Phonics-Magnetic-Alphabet/dp/B000096QNK