There are people and acquaintances in your lifetime. Then there are few that you can truly call friends. Friends invite you to their weddings. True friends ask you to blog about it. Then you have to think of just the right words to say, or else, well then you would suck as a friend. Kidding. But, I did find it hard to gather the perfect words. It's now been a few months since my friends Jason and Diep were married but I am happy that they even asked me to write about their special day. 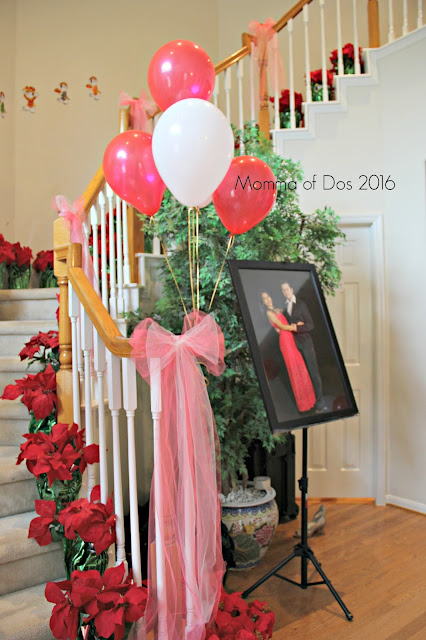 First off, I don't like to pass up opportunities to write about events, especially one like this. The morning of the wedding I began to feel a little pressure. My friend had asked me to write about his wedding. I got nervous, the bride is Vietnamese and that morning as I drove to the location I realized it was at her home. I know, from other Vietnamese friends, that there are very specific traditions followed when they do their ceremonies in their homes.  So, I had to figure out everything I needed to know before I arrived at the wedding location. I reached out to one of my good friends, Tran.

I messaged her on Facebook and asked her what I needed to know in order to be respectful to the morning's event. As she began to tell me the details and the history behind the wedding ritual, the tears started. Such a detailed ceremony filled with meaning, and so much history. Tran explained to me that the wedding would consist of an extensive set of ceremonies. The bride's family would first have to ask for permission to receive the bride at the groom's house, the groom is asking her family and her ancestors if he can take her from her home. The bride is received at her house and is then taken to the groom's house to be received by his family. The end-point is for both families to be properly introduced and accept the coming together of two lives. 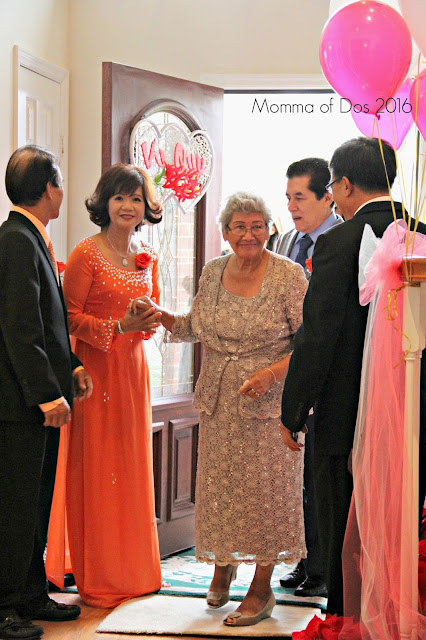 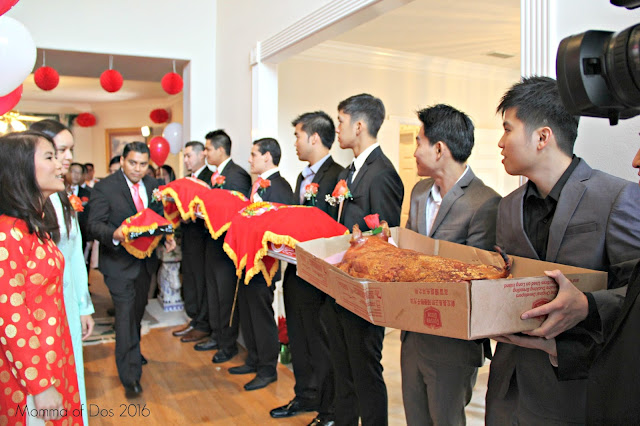 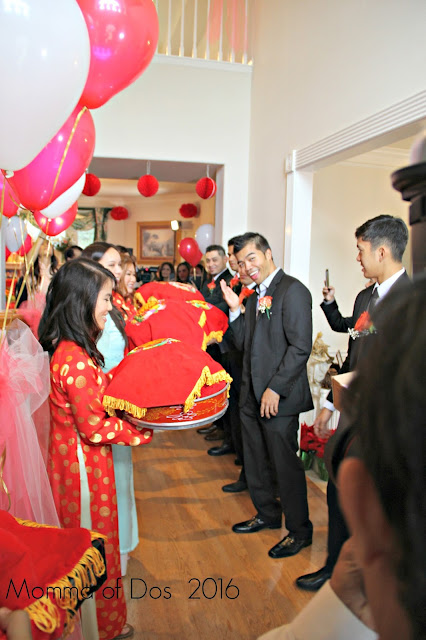 Tran explained how symbolic the rituals are and how deeply emotional one can become. Essentially like in most faith-based weddings, the family is giving their daughter away to her husband. And, as one family "loses" their daughter the other has gained her as an important new part of their family. Yes, these traditions can seem very sexist and dated, but of course while some traditions still stand others have changed with the time and blend of American cultures. I don't ever like to see the bride as someone who is just handed over to a new family, in this day in age the bride chooses who she wants to be with and it's a coming together of two willingly adults. Which is far more meaningful.

Once arrived it was evident that traditions and cultures had blended while everything would be very traditional there was also an understanding that the groom's family and friends were not Vietnamese. We were welcomed into their home and placed at ease about what was expected of us, which was to enjoy the wedding as we would any other. 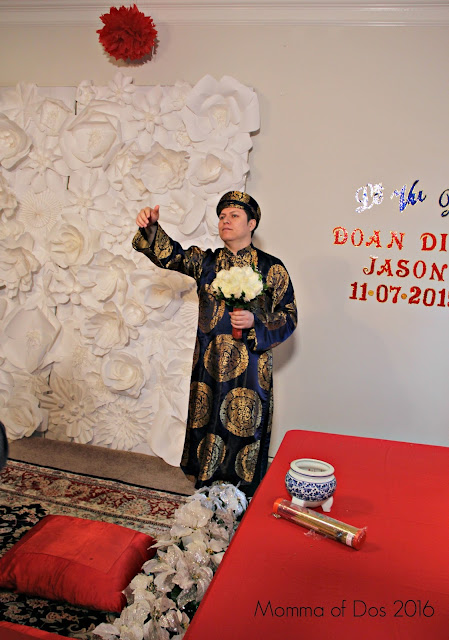 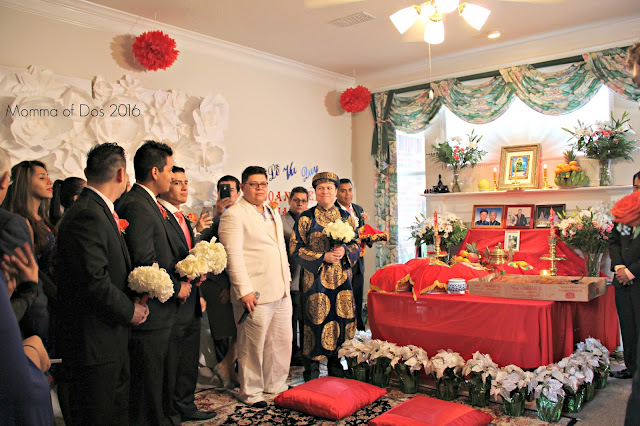 When the groom arrived his groomsmen, close family and friends formed a line outside the house. The procession had a specific order. A representative of the groom's house was assigned, And, the groom's father and the groom led the way, followed by the rest of his family and his close friends.

In the procession, the groomsmen had lacquer boxes, covered with red cloths. Inside these boxes were specific gifts representing, according to tradition;

"wealth that the groom's family will bring to the bride's family. Gifts are usually fruit, cakes, a roast pig, fabric, and an abundance of jewelry for the bride. Usually, the number of gift boxes varies between 6 or 8, but never 7 or 9 since it is seen as bad luck. However, it depends on personal view and might be reduced to 2-3 boxes." [In Vietnamese beliefs, the even number and the red color will bring luck to the young couple.] - (Source: Wikipedia)

The groom then presented the gifts to the bride's family, where traditionally he is then given permission to greet the bride. Diep who until that day lived in the U.S. with her Aunt and Uncle was then escorted downstairs in a beautiful red traditional wear gown by her Aunt. After the bride was downstairs and presented to the attendees. Each groomsmen presented the bridesmaids with flowers and introduced themselves. after which a family representative from each side introduced each of their family, extended and all. 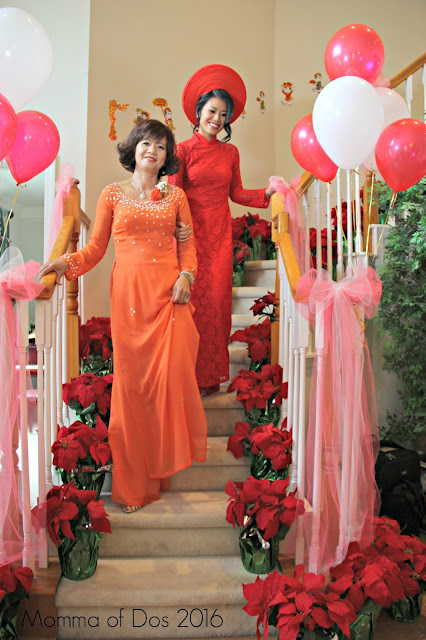 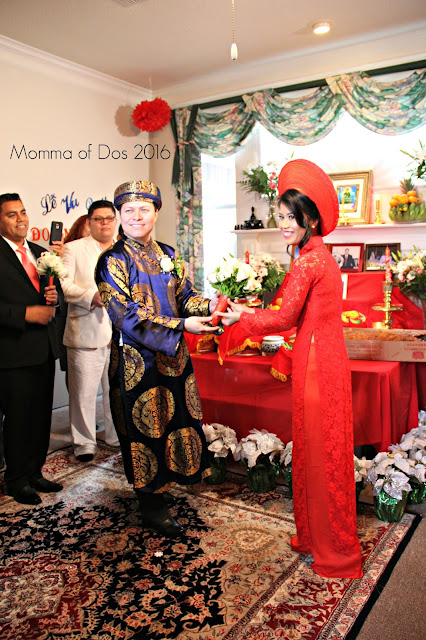 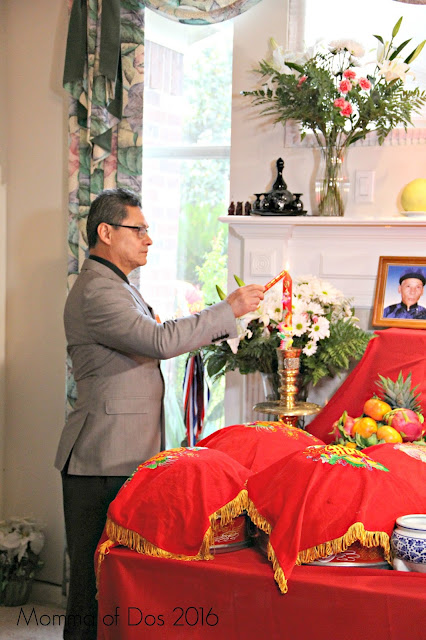 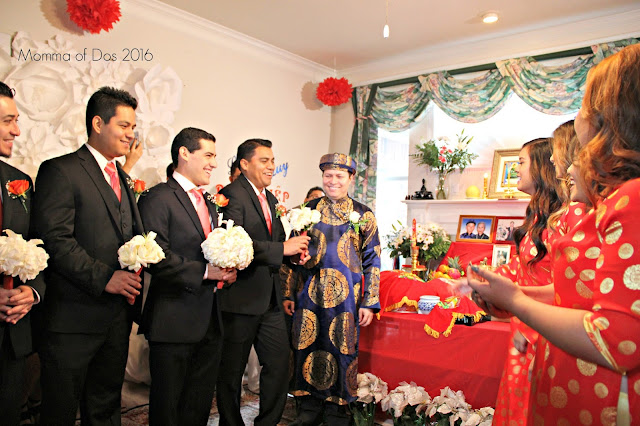 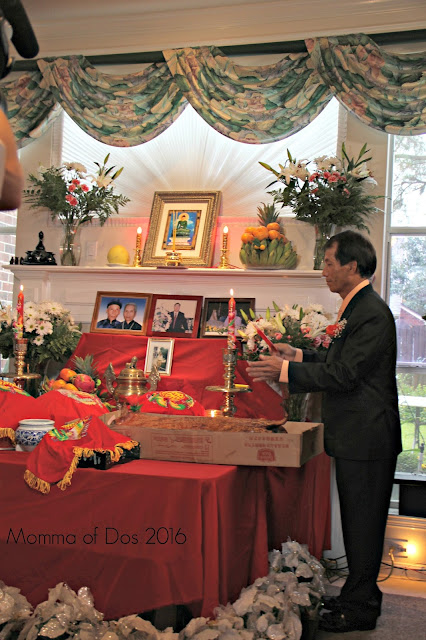 The "permission" ceremony then began, in front of an elaborate and very colorful, ancestor altar which represented the bride. The bride and groom burn incense and asked for permission from the ancestors to bless them on their new journey together. The couple then turned and bowed to their parents (her Aunt and Uncle in this case, who represented her Mother), they gave thanks for raising them and bringing them to this point. The bride and groom became very emotional. Jason's mom passed away a few years back and Diep's mom is in Vietnam. 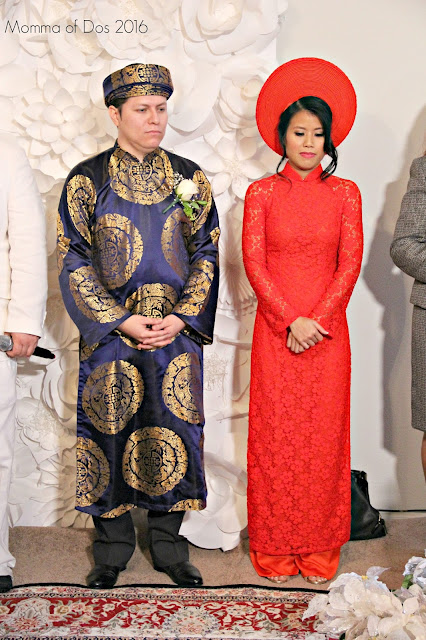 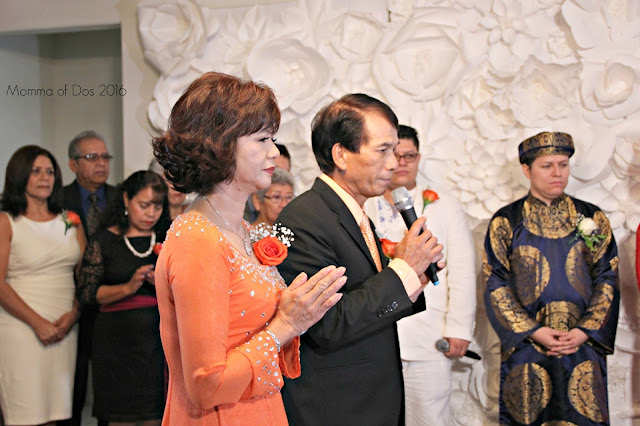 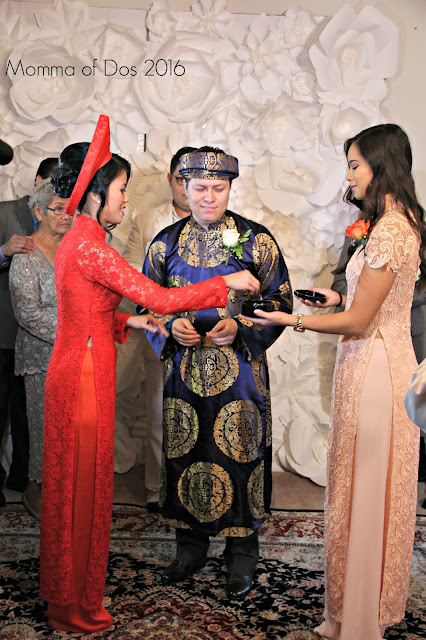 They had a traditional ring exchange, a beautiful tea, and candle ceremony, along with speeches thanking their families and each other. The bride's family members each provided heartfelt advice and words of support. In all, the wedding was an amazing experience and I am so thankful to have been invited to be a part of such a wonderfully rich tradition. One that I hope Diep and Jason pass along to their children. 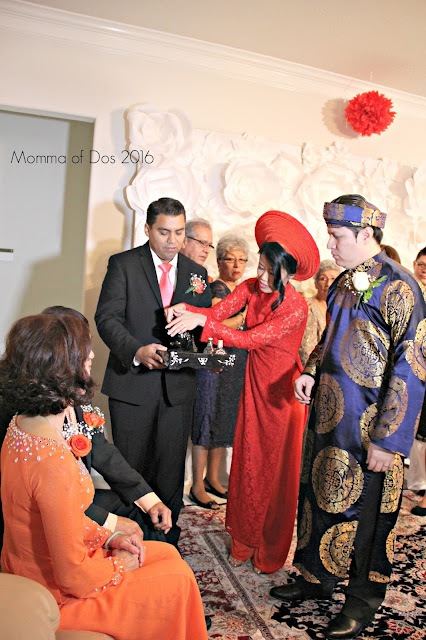 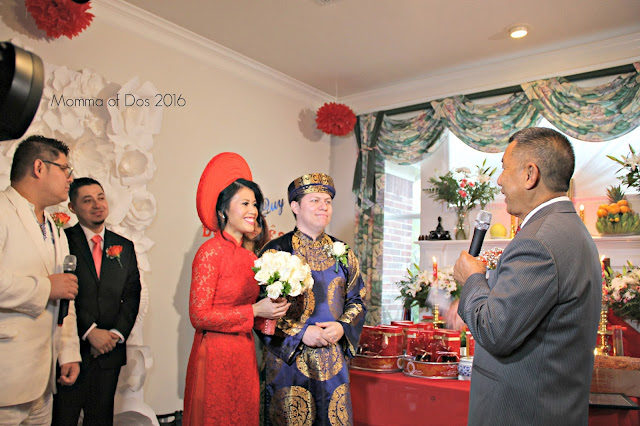 My own words of advice for the couple, continue as you are. Strong, together. Loving one another and supporting each other no matter what. Life has been tough for you both but trust me, it will get better. May you both have a lifetime of bliss and love. 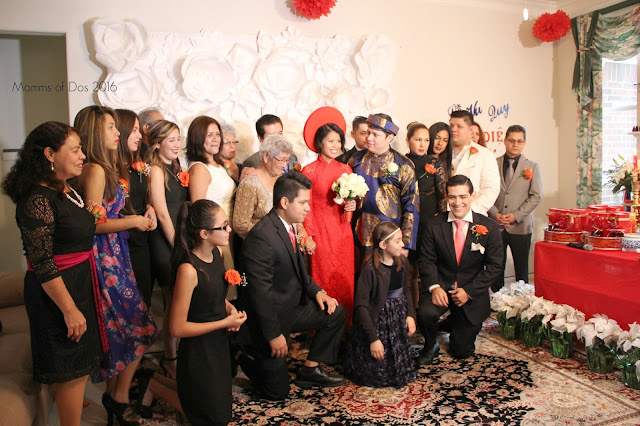 Jason Garcias is a Houston podcaster and videographer, he is one of the hosts for the Elder and Jay show. He is an amazing Michael Jackson fan and well-rounded individual.